The bodies of 39 people have been found in a lorry container in Essex.

The vehicle, believed to have travelled from Bulgaria, was found shortly before 01:40 BST at Waterglade Industrial Park in Grays, police said.

Everyone inside the container, 38 adults and one teenager, died, Essex Police said.

The lorry driver, a 25-year-old man from Northern Ireland, has been arrested on suspicion of murder.

Police said the vehicle entered the UK via Holyhead, Anglesey, on Saturday.

Deputy Chief Constable Pippa Mills said identifying the victims remained a "number one priority", but was expected to be a "lengthy process".

The National Crime Agency said it had sent officers to assist and identify any "organised crime groups who may have played a part".

Seamus Leheny, Northern Ireland policy manager for the Freight Transport Association, said if the lorry had come from Bulgaria, getting into Britain via Holyhead was an "unorthodox route".

He added with reports of increased security checks at Dover and Calais "it might be seen as an easier way to get in by going from Cherbourg or Roscoff, over to Rosslare, then up the road to Dublin".

Richard Burnett, chief executive of the Road Haulage Association, said the container appeared to be a refrigerated unit, where temperatures could be as low as -25C.

He described conditions for anyone inside as "absolutely horrendous".

A spokesman for the Bulgarian foreign affairs ministry said it had not been confirmed whether the truck was registered in the country.

"There is also no indication of the nationality of the human bodies found in the truck," he said.

Police have appealed for witnesses and anyone with information about the lorry's route to contact them. 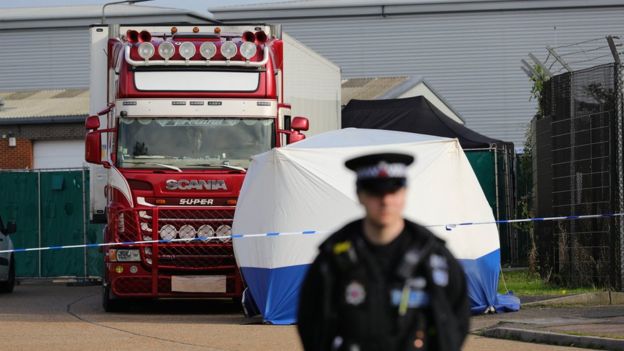 Officers are inspecting the lorry at the Waterglade Industrial Park in Grays (Copyright: PA MEDIA)

Prime Minister Boris Johnson said it was an "unimaginable tragedy and truly heartbreaking".

Speaking at Prime Minister's Questions, he said: "I know that the thoughts and prayers of all members will be with those who lost their lives and their loved ones.

"I'm receiving regular updates. The Home Office will work closely with Essex Police as we establish exactly what has happened."

Home Secretary Priti Patel said she was "shocked and saddened", while Thurrock MP Jackie Doyle-Price said it was "sickening news".

During PMQs, Ms Doyle-Price said: "To put 39 people into a locked metal container shows a contempt for human life that is evil. The best thing we can do in memory of those victims is to find the perpetrators and bring them to justice."

Mr Johnson responded saying "all such traders in human beings should be hunted down and brought to justice".

Labour leader Jeremy Corbyn said it was an "unbelievable human tragedy", adding: "Can we just think for a moment of what it must have been like for those 39 people, obviously in a desperate and dangerous situation, for their lives to end, suffocated to death in a container?"

Irish Prime Minister Leo Varadkar told the Dail that investigations would be undertaken to establish if the lorry had passed through Ireland. 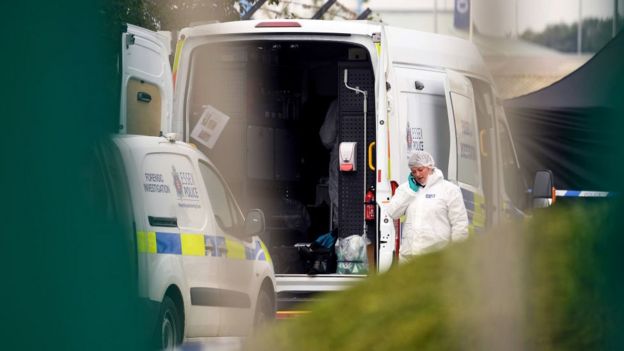 Forensics officers have been at the scene since the bodies were discovered (Copyright: GETTY IMAGES)

How many migrants have died in transit?

The number of migrants who die in transit has been recorded by the UN since 2014.

Since then, five bodies of suspected migrants have been found in lorries or containers in the UK:

Data was not collected in the same way before the migrant crisis began in 2014, but such deaths are not new.

In 2000, 58 Chinese migrants were found suffocated to death in a lorry at Dover.

In 2015, the bodies of 71 people were found in an abandoned lorry on an Austrian motorway. Police suspected the vehicle was part of a Bulgarian-Hungarian human trafficking operation.

BBC Essex reporter Peter Walker described the scene on the industrial site as "quite chaotic".

He said: "The number of bystanders and reporters is continuing to grow." 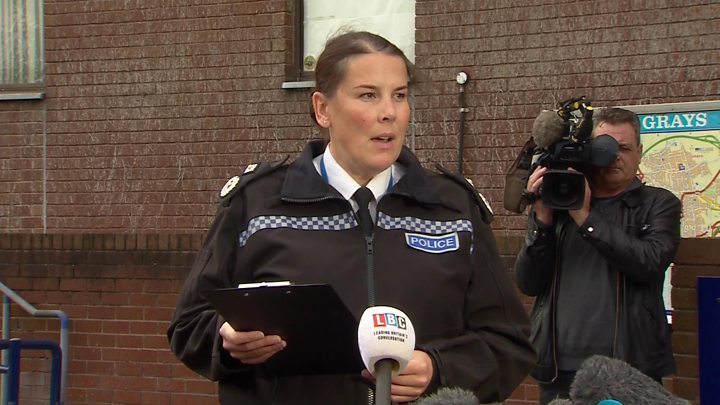 Essex Police has set up a casualty bureau for anyone concerned about relatives to call.

The British Red Cross has confirmed staff and volunteers were helping "those dealing with this terrible tragedy".

Why so many are risking the back of a lorry

Since the completion of a fence on the Bulgaria-Turkey border, most asylum-seekers trying to reach Western Europe do so hidden in trucks.

One part of the smugglers' network hands them on to others. They are then kept in "safe" houses in Bulgaria, usually close to the Serbian or Romanian borders, to be put into new trucks bound for Western Europe.

Since 2016, there have been fewer and fewer ways to enter Western Europe legally - hence the desperation of those on the road.