The UK's terrorism threat level has been downgraded from "severe" to "substantial", the Home Office says.

Home Secretary Priti Patel said the UK was still at "a high level of threat" and an attack could "occur without further warning".

The terrorism threat is now at its lowest since August 2014. Substantial is the third of five ratings at which the threat level can stand.

Ms Patel said in a statement on Monday that terrorism remained a "direct and immediate" risk to the UK's national security.

Assessments determining the country's threat level are taken by the Joint Terrorism Analysis Centre (JTAC) - part of MI5 - which makes its recommendations independently from the government. 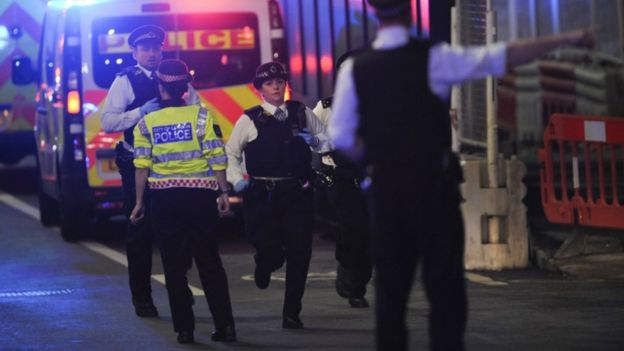 There was a surge in terror attacks in 2017, including in London Bridge where eight people were killed (Copyright AFP)

"Government, police and intelligence agencies will continue to work tirelessly to address the threat posed by terrorism in all its forms," Ms Patel said.

The threat level is kept under "constant review", she added.

Neil Basu, head of counter terrorism policing, said there had been "positive developments" in the fight against terrorism but it was "vital that we all maintain a high level of vigilance".

The UK's terrorism threat level was raised to the highest rating, "critical", in May 2017 after the Manchester Arena bombing.

It was downgraded to "severe" in September 2017 and remained at that level until Monday.

The five levels of threat set by the JTAC are:

This is a significant change in the only official public measure of the threat posed by terrorism to the UK - but it's not a sign that there are suddenly fewer people with aspirations to do us harm.

The security services are still monitoring thousands of "subjects of interest" - the top-tier of would-be plotters from jihadist groups to the far-right.

Many of these people are very dangerous because, in the jargon, they are "lone actors" bent on DIY violence.

But what appears to have changed is the resources and capability available to IS-supporting plotters who need help.

Quite simply, a huge number of the foreign fighters who played a key role linking these followers to resources and support died on the battlefields of the militant group's last stand.

Continuing propaganda from the survivors, portraying IS as a force to be reckoned with, also has less credibility for would-be recruits.

And so it has become harder - for now at least - for some of those with intent to get the help they need to carry out their aspirations.